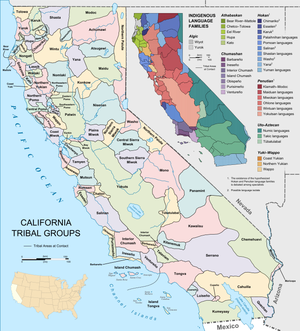 A map of California tribal groups and languages at the time of European contact.

The Indigenous peoples of California (known as Native Californians) are the indigenous inhabitants who have lived or currently live in the geographic area within the current boundaries of California before and after the arrival of Europeans. With over one hundred federally recognized tribes,[1] California has the largest Native American population and the most distinct tribes of any US state.[citation needed] Californian tribes are characterized by linguistic and cultural diversity.

Before European contact, native Californians spoke over 300 dialects of approximately 100 distinct languages. The large number of languages has been related to the ecological diversity of California,[3] and to a sociopolitical organization into small tribelets (usually 100 individuals or fewer) with a shared "ideology that defined language boundaries as unalterable natural features inherent in the land".[4]

"The majority of California Indian language belong either to highly localized language families with two or three members (e.g. Yukian, Maiduan) or are language isolates (e.g. Karuk, Esselen)."[5] Of the remainder, most are Uto-Aztecan or Athapaskan languages. Larger groupings have been proposed. The Hokan superstock has the greatest time depth and has been most difficult to demonstrate; Penutian is somewhat less controversial.

There is evidence suggestive that speakers of the Chumashan languages and Yukian languages, and possibly languages of southern Baja California such as Waikuri, were in California prior to the arrival of Penutian languages from the north and Uto-Aztecan from the east, perhaps predating even the Hokan languages.[6] Wiyot and Yurok are distantly related to Algonquian languages in a larger grouping called Algic. The several Athapaskan languages are relatively recent arrivals, no more recent than about 2000 years ago.

Linguistic anthropologist Jocelyn C. Ahlers writes that there are "ideologies on the deployment of silence as a salient attribute of women's speech in contexts which are framed as traditional and closely tied to Native California languages of heritage."[7]

Further information: History of the west coast of North America

Evidence of human occupation of California dates from at least 17,000 BCE.[1] Prior to European contact, California Indians had 500 distinct sub-tribes or groups, each consisting of 50 to 500 individual members.[2] The size of California tribes today are small compared to tribes in other regions of the United States. Prior to contact with Europeans, the California region contained the highest Native American population density north of what is now Mexico.[2] Because of the temperate climate and easy access to food sources, approximately one-third of all Native Americans in the United States were living in the area of California.[8]

Early Native Californians were hunter-gatherers, with seed collection becoming widespread around 9,000 BCE.[2] Due to the local abundance of food, tribes never developed agriculture or tilled the soil. Two early southern California cultural traditions include the La Jolla Complex and the Pauma Complex, both dating from ca. 6050—1000 BCE. From 3000 to 2000 BCE, regional diversity developed, with the peoples making fine-tuned adaptations to local environments. Traits recognizable to historic tribes were developed by approximately 500 BCE.[9]

The indigenous people practiced various forms of sophisticated forest gardening in the forests, grasslands, mixed woodlands, and wetlands to ensure availability of food and medicine plants. They controlled fire on a regional scale to create a low-intensity fire ecology; this prevented larger, catastrophic fires and sustained a low-density "wild" agriculture in loose rotation.[10][11][12][13] By burning underbrush and grass, the natives revitalized patches of land and provided fresh shoots to attract food animals. A form offire-stick farming was used to clear areas of old growth to encourage new in a repeated cycle; a primitive permaculture.[12]

Some other tribes, such as the Quechan or Yuman Indians in present-day southeast California and southwest Arizona, were the first to encounter Spanish explorers in the 1760s and 1770s. But others on the coasts of northwest California, such as the Miwok, Yurok and Yokut, came across Russian explorers and seafarers coming from Alaska in the late 18th century. Russians established Fort Ross, a short-lived fortified colony, in the early 1800s, 60 miles north of present-day San Francisco.[citation needed]

The Spanish began their long-term occupation in California in 1769 with the founding of Mission San Diego de Alcalá in San Diego. The Spanish built 20 additional missions in California.[15] Their introduction of European invasive plant species and non-native diseases resulted in unintended havoc and high fatalities for the Native populations.

The population of Native California was reduced by 90% during the 19th century—from more than 200,000 in the early 19th century to approximately 15,000 at the end of the century, mostly due to disease.[9] Epidemics swept through California Indian Country, such as the 1833 malaria epidemic.[14]

With Mexican independence in 1834, the Spanish missions were taken under Mexican control and secularized. But the new government did not return their lands to tribes but made land grants to settlers of at least partial European ancestry. Many landless Indians found wage labor on ranches. Following the United States victory in the Mexican-American War, it took control of California in 1848 with the signing of the Treaty of Guadalupe Hidalgo. Its administrators worked to honor Mexican land grant title but did not honor aboriginal land title.[14]

Acorns are a primary traditional food throughout much of California. Their diet includes fish, shellfish, deer, elk, and antelope, and plants such as buckeye, sage seed, andyampah (Perideridia gairdneri).[2]

Zahrotul Afifah
27 October 2018
Dakwah Islamiah
Article
Certainty, Islam did not divide between religion and people's lives because the speech of Al-Quran Book; Allah's speech described about Allah and his belief that the god talked about paradise an...
Read More
Zahrotul Afifah
26 October 2018
Islam in Present
Article
Islam has been in Cambodia in Cambodia for many centuries ago. We also have an inscription in stone, which got from Bak Kheng temple (The name of temple) in the Khmer museum of Cambodia has an Arab's ...
Read More
Stefanus -
22 October 2018 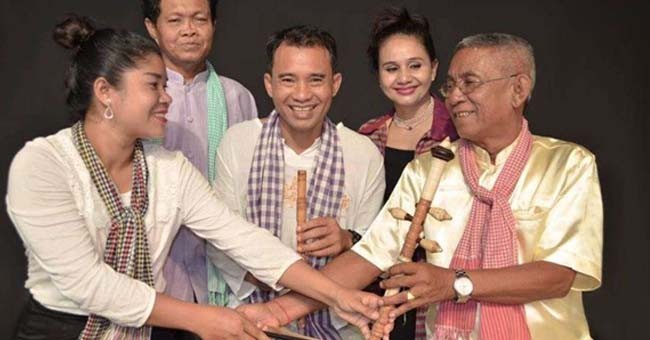 Veteran Cambodian Artists to Tour US East Coast Cities
Article
WASHINGTON D.C. — Five Khmer Rouge survivors and performers will share their personal journeys of reviving the Cambodian arts scene through a series of performances in six US cities. The performances,...
Read More