Five Khmer Rouge survivors and performers will share their personal journeys of reviving the Cambodian arts scene through a series of performances in six US cities.

The performances, titled "Heartstrings" and organized by Cambodian NGO Cambodian Living Arts (CLA), will take place over three weeks from October 25 as part of the "Arts4Peace" tour.

Samnang Heng, CLA's program coordinator, said the tour aims to tell Cambodian stories from the lives of the five artists.

"The Arts4Peace tour tells the personal stories of musicians and artists who had a career in arts before, during and after the Khmer Rouge," she said. "We want to show how their lives up until now have been changed through arts, music and culture."

In 2013, two of the featured artists, CLA founder Arn Chorn-Pond and artist Thorn Seyma, co-founded an independent mobile music project, Khmer Magic Music Bus, which was later integrated as one of the main programs at CLA, with the goal to help "Cambodian master musicians and their students return traditional music performance and education to the people of rural Cambodia, one village at a time." 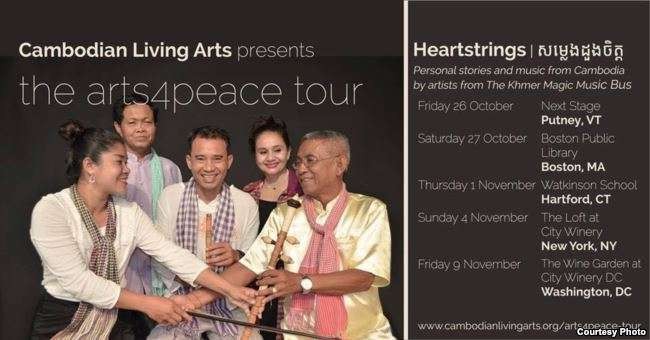 "The bus that takes the five artists and teams to perform from one location to another in the US will have the same signs and decorations as the one we use in Cambodia," Heng said. "We want to show audiences in America that this is the same Khmer Magic Music Bus experience that Cambodian Living Arts delivers across Cambodia."

Cambodian Living Arts was founded in 1998 to help masters of traditional Cambodian instruments who survived the Khmer Rouge regime, and encourage young students to learn their craft.

Chorn-Pond believes that the arts can heal and transform people and societies. In a 2012 interview with VOA, Chorn-Pond said that he lost his family to the Khmer Rouge genocide and used arts and music to heal.

"Music saved my life in the first place," he said. "That's why music's coming back to my life again and I'm using it to the fullest, not only to just play but to pass down this culture that's dying, to the next generation."

Heng explained that the Arts4Peace tour embodies Chorn-Pond's belief and celebrates the 20th anniversary of CLA working to transform Cambodia's troubled past through the arts.

"We want to show our Cambodian-American and American audiences that despite going through wars and tragedies, Cambodia has a new face today. We've built peace, especially peace of mind through the arts, music and culture."

"This is what we [CLA] are trying to achieve, and this is our contribution to the development of Cambodia."

Veteran Cambodian Artists to Tour US East Coast Cities
Article
WASHINGTON D.C. — Five Khmer Rouge survivors and performers will share their personal journeys of reviving the Cambodian arts scene through a series of performances in six US cities. The performances,...
Read More
Zahrotul Afifah
27 October 2018
Dakwah Islamiah
Article
Certainty, Islam did not divide between religion and people's lives because the speech of Al-Quran Book; Allah's speech described about Allah and his belief that the god talked about paradise an...
Read More
Stefanus -
22 October 2018

Cambodia earns Guinness Record for longest woven scarf
Article
Phnom Penh - Cambodia won a place in the Guinness book of World Records on Sunday for a 1 100-metre long version of the country's popular krama scarf. Supported by a youth movement with links to the n...
Read More